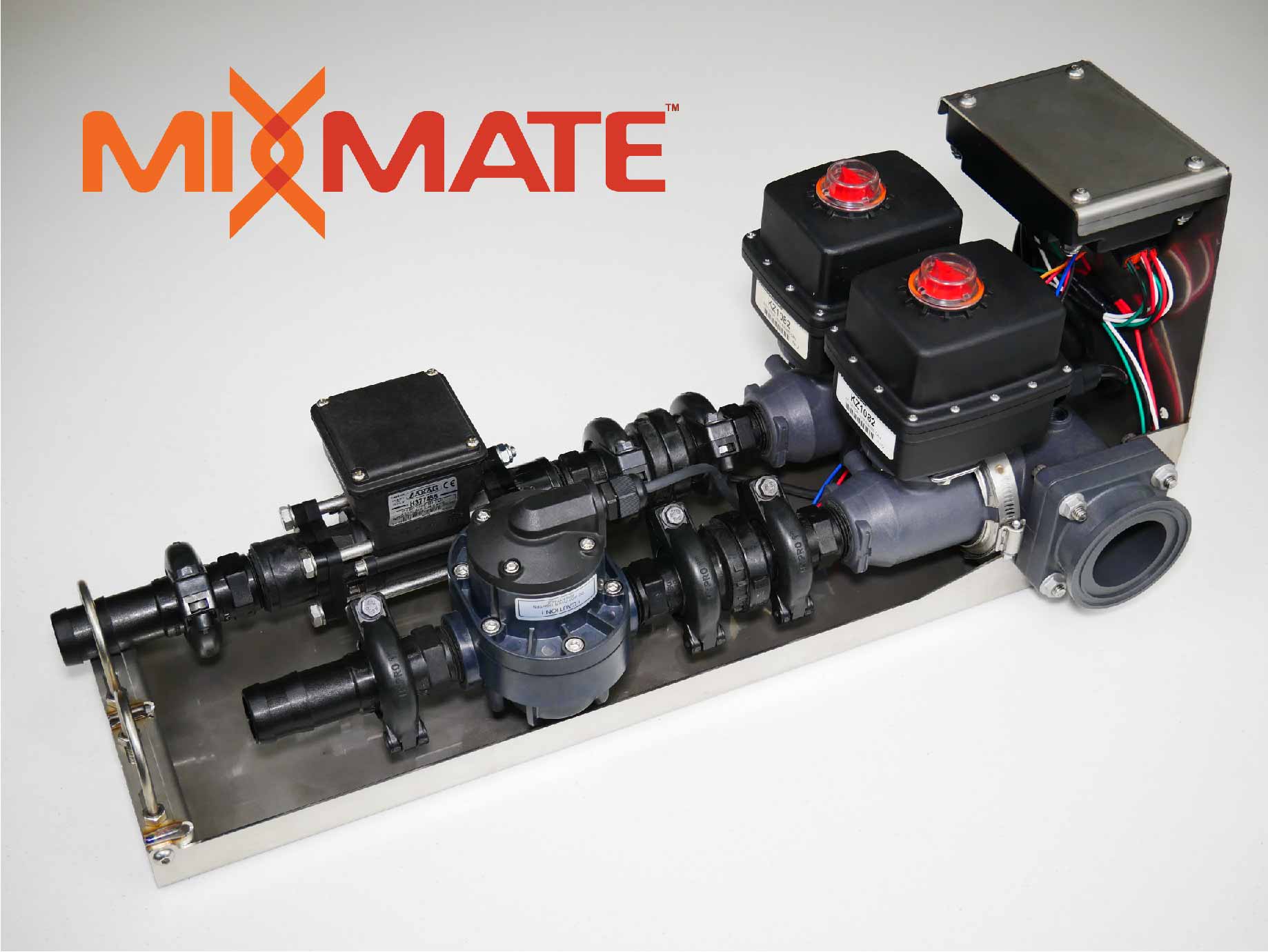 Mixmate Flow is our volumetric based chemical mixing system.  It is a low cost way to get started with automated mixing.  Compare Mixmate Flow with other manual and automated systems on the market and you will find a combination of features that are not available with any other system.  There are a number of very nice manually operated mixing systems on the market that are in the same price range as Mixmate Flow.  We want you to compare systems and let us know your preferences.  We think automated mixing and automated recordkeeping will tip the balance in favor of Mixmate Flow.

Mixmate Flow comes as a simple unit with all of the wiring in place.  Just mount the assembly in either the horizontal or vertical orientation and connect the hoses.  The assembly is mounted between the water supply tank and the transfer pump.  When a 2-inch pump is used, the full flow passes through the manifold and chemicals are mixed directly into the flow.  When a single 3-inch pump system is used, part of the flow bypasses the manifold to maintain the full 3-inch capacity.  The chemical hoses from the bulk tanks are connected to the flowmeter inputs.  Multiple units can be stacked together to add bulk connections.

Mixmate Flow has several flowmeter options and we prefer to use quality flowmeters that do not require calibration.  The options include mag meters, positive displacement, and mass flowmeters.  The price can vary widely and we will recommend the right meter option for you.  Flowmeters give the best speed with good accuracy.  Most farmers have experience with low-cost battery powered meters and are looking for better options with high accuracy and reliability.

Mixmate Flow is a closed system.  Chemicals are pumped directly from bulk containers into the spray mix.  The closed system gives superior operator safety and simplifies the plumbing on the spray tender trailer.

Mixmate Flow is used on the bulk tanks of chemicals.  Jugs and dry flowables still need to go through an inductor.  The Mixmate Inductor is the best choice, but you can always add features later with a Mixmate system.  Mixmate Flow is modular and flexible to fit your needs.  You may already have an inductor on your chemical mixing trailer or use the inductor mounted on the sprayer.  This keeps the cost down when you can utilize your existing components.

The Mixmate App still does all of the calculations for you and you can record the manually measured products along with the products that were measured automatically to create a complete mixing record.

Many farmers are already using The Handler or a Chembine type of mixing system.  Mixmate Flow can be used with one of these types of systems to measure and record the bulk chemicals into the mix.  The knife system is preferred by some to process the jugs and is a very good option.  If you have large amounts of a dry product that does not dissolve well and it needs recirculation in a mixing tank to put it into solution, The Handler or a Chembine may be the best option for this purpose.  The Mixmate Inductor works very well with most dry flowables and AMS as well.

The JD Skiles Pit Stop and the Batch Boy systems use graduated cylinders to measure the chemicals by volume.  The accuracy should be very good on level ground.  The systems are very dependent on the operator to read the gauge correctly for accurate measurements.  They require the chemicals to essentially be pumped twice.  Once to fill the measuring cylinder and once to empty the measuring cylinder.  We used this type of measurement 30 years ago on our farm.  It worked, but it was slow.

These systems are manually operated and any records must be kept manually.  These two systems are getting into the price range of a Mixmate Flow that has full automation of the chemical mixing from bulk tanks.  Full automation of the bulk chemical mixing allows you to process the jugs without distraction and mistakes.  The records are automatic for the bulk products and the manually added products can easily be recorded in the mixing record.

The big advantage of the Spray Fill Xpress is the fast loading time.  To be sure you can load fast, someone has to prepare the chemicals ahead of time.  Multiple tanks keep the chemicals separate until it is time to mix.  Some type of pump is required to move each bulk chemical into the holding tanks.  The chemicals can be measured by weight but the scale is large and the resolution would be low.  If measuring by weight, only one chemical can be measured at a time.  This is where your helper comes in to prepare the load ahead of time.

The Mixmate App could be used to calculate the batch and output the weight of each chemical.  Each tank has a small flowmeter to measure the bulk chemicals.  The flowmeters could be calibrated from the scale which would be very convenient.  Multiple chemicals could be measured simultaneously by flowmeter.  Jugs are still manually processed.  The price of the Spray Fill Xpress is close to our Mixmate Inductor and the Mixmate Flow system combination.  This is our most versatile system.

The basic QuickDraw Lite is a flowmeter with a display.  Electric valves can be added to give it automatic shutoff abilities.  There are no recordkeeping capabilities.  An equivalent Mixmate Flow system using multiple flowmeters with electric valves will cost less and have our full recordkeeping capabilities along with full automation.  Mixmate Flow can also be set up with a mass flowmeter.

Several of the systems mentioned above take a significant amount of space on the trailer.  Space is always a limiting factor on a trailer and Mixmate Flow requires a very small footprint.  Mixmate Flow can even be mounted below the trailer deck to free up work space.

As you can see, Mixmate has options that compare very well with the competition.  The manual systems do not have recordkeeping and only the highest priced competitor has a basic recordkeeping system.  Our system is modular and it will grow with you no matter where you start.  So why not start with Mixmate?  The chemical mixing system that has a future!

Learn the many ways Mixmate can benefit your farm operations.

Mixmate was designed for farmers by farmers.

Poor In the Field Records